As we started last Wednesday with information of Dalí, I recommend you to watch the next video in which you will see some interesting facts that perhaps explain why Dali saw the reality quite different from us.

Dalí had not a normal childhood. When he grew up his aims in life were quite childish and immature, but this eccentric vision of life left us a huge and priceless production of artwork.


Salvador Dalí made paintings, sculptures and films about the dreams he had. He painted melting clocks and floating eyes, clouds that look like faces and rocks that look like bodies.
Dalí was involved with surrealism. This was an art movement where painters made dream-like scenes and showed situations that would be bizarre or impossible in real life.
Let's talk about SURREALISM!
What has a lobster got in common with a telephone? Find out here!
YOUR TASK today is play this SURREALIST QUIZZ just to find out more info about the movement.
I hope you have enjoyed the Arts class today.
See you next Wednesday. Prepare your brain cause we will start producing art!

"Drawing is the honesty of the art. There is no possibility of cheating. It is either good or bad".
Salvador Dali

DALI was a famous and well-known artist. He was born in Figueres, Spain, in 1904. He died in 1989, in the same town. During his life he studied, worked and produced lots of artworks.

Salvador Dali was involved in a huge variety of art forms, but surrealism is considered his true forte. Ironically though, he was kicked out (expelled) of the group of Surrealists in the 1930s, to which he arrogantly responded: “I myself am surrealism”. (It was totally true)


Surrealist art portrays various unrelated elements put together in any order, depending upon the artist’s view.
You’ve probably known one of the most iconic pieces of surrealist art which shows ‘melting watches’ – Dali’s most famous work, ‘The Persistence of Memory’. 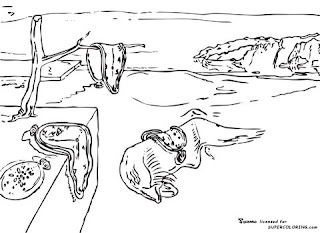 Dali’s work wasn’t just an assortment of random objects – they often had deep religious and political underlying themes. He was also drawn to mathematics and quantum physics and many pieces of his work reflect this fascination as well. But most of all, Dali’s work had no boundaries (limits) – it conformed to nothing and could be anything.
That is why Dali is a great inspiration for you, kids, especially the ones who want to color outside the lines!
Information taken from ArtsyCraftsyMom
Click on and watch the video.


For today I think it is enough, pupils.
Have a nice and Super Realistic Day!!

Good Morning my little readers:
I'm going to let you correct the activities (page 88) briefly and then, we will see how we can enjoy this Day.

PAGE 88. Activity 2.
They are playing the "YES/NO" game. In the game you ask someone questions  to try to get them to say YES or NO. (Other way round: You cannot answer YES nor NO when someone ask you questions).

WORLD BOOK DAY
For this special day I want to share a video with you of one your favourites writers. He's Jeff Kinney, the author of  "DIARY OF A WIMPY KID" (in Spanish: El Diario de Greg).

I know by heart that some of you love these stories and now you have the opportunity to share this challenge with him.

Watch the video and try to do the challenge: You have to try to write the first page of your "Special Diary" It must be funny, so think about some funny moments in your life, people involve in the story... friends, family members...and of course, add some pictures!
Please, take a photo and send it to me by email.
Don't forget to share it with your friends and family.
That's not all...

And of course, a game for Harry Potter's fans!! I couldn't forget you sweeties!

And, the last one...For those who like LOL very day...One game very...Dirty Bertie

Have a nice WORLD BOOK DAY!
Click on here if you want more.

Hi everyone!
How are you doing?
Do you recognize these expressions: CU 2morrow, LOL, BFF, OMG, NOPE...?
They're globally well-known.
But there are other symbols that we can include in our language to improve it or just only for fun.
Today we're talking about Languages that don't use word to communicate.

1st. Page 90. Activity 1. Before you read answer the questions orally and instead talk with a mate, talk with a relative. (family member) 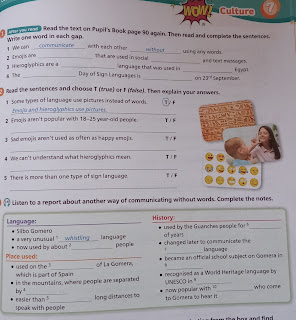 4th. Watch the culture Video and complete the activities from the worksheet. 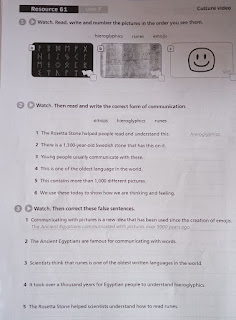 I will post the answer key tomorrow.
Take it easy!﻿

1st. A special song absolutely for these days and just enough not to be sad ...


2nd Let's Play a Game!
FLING THE TEACHER
Enjoy yourself and don't forget to read a chapter every day!
I will post the answers of the activities of each reader/book if the isolation continues!
CU Soon
Publicado por Mª del Carmen en 09:30